“The best preparation for good work tomorrow is to do good work today,” says Elbert Hubbard. The above statement resonates in a solo exhibition of works by one of Nigeria’s leading contemporary artists and best-known water colourists, Sam Ovraiti, which opened last Saturday in Lagos.

The exhibition, titled ‘Waiting for Tomorrow’, and hosted by Alexis Galleries, Victoria Island, Lagos, is jointly curated by Mathew Oyedele, Ideh Eyimofe and Ike Sandra. Waiting for Tomorrow, is the first solo outing of the artist after his retrospective exhibition at Alexis Galleries in 2019. Currently working in Lagos, Ovraiti is known as one of the best contemporary artists to have tested the limit and boundaries of colour, over the years.

In this exhibition, “his oeuvres from 1994 to 2022 are presented as epiphanies into the significance of appreciating time and living in the moment.” Significantly, Ovraiti’s personal experience has made him realize that the tomorrow he was waiting for had already happened and the works that would give him values had already been created. Thus, the works that were therefore once abandoned were swiftly completed and thus became a thing of yesterday. 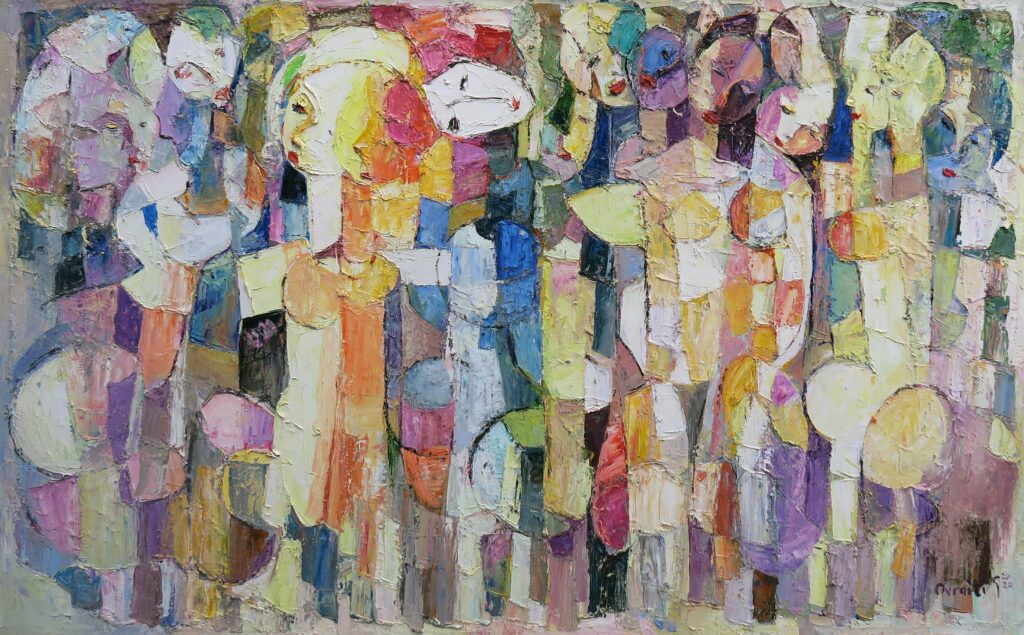 “Waiting for Tomorrow is an exhibition that sees tomorrow as yesterday and places emphasis on living in the moment.

In the words of the curators, Mathew Oyedele, Ideh Eyimofe, Ike Sandra, “Waiting for Tomorrow is an exhibition that sees tomorrow as yesterday and places emphasis on living in the moment. In this momentous realisation, hiscolour orchestration, good draughtsmanship and boldness to expand his range of materials remain evident.

His heavily-layered impasto where he allows the nature of the medium to influence his style, his stylised forms, his subtle and contemplative watercolours as well as pastel works are rendered with infinite dedication to the complexities of colour.” For Ovraiti who is renowned as the most expressive watercolourist in Nigeria, this exhibition shows that what we put in our cup is what will spill tomorrow. “When we are shaken by life the Limitedmasterpieces of yesterday can only be shown. Today is the tomorrow we were looking at yesterday.

Where is tomorrow? A representative of the next 24 hours will come soon. Yes. When I planned this exhibition at Alexis Galleries, I was waiting for tomorrow with such promises that I will create new works with new revelation and new results but now I know that tomorrow is already my yesterday and today. “I thank Patty Chidiac of Alexis Galleries for creating the space to show my works today.

We expected some new works to be added to this collection without knowing that you can only spill from your cup what you have already created. We had to go through the archives to look for masterpieces to be exhibited,” he said. According to him, all the works created and exhibited here were created yesterday waiting for tomorrow. “Although I am better now, no new work was added to this collection in five months.

Today is the time you create the tomorrow you are imagining. In fact you ended tomorrow yesterday and today is all you have left.” Founder, Alexis Galleries, Patty Chidiac Mastrogiannis, noted that this solo exhibition by Ovraiti takes a philosophical outlook that is influenced by personal experiences. According to her, Ovraiti is a name that does not need much introduction but his relentless experimentation and exploration with materials keep on showing his works in new ways that require new curiosity to fathom. ‘Waiting for Tomorrow’, she further stated, is “an exhibition of works that have grown, appreciated and increased in value over time and we hope you see the importance of seizing and living in the moment from this exhibition.”

Ovraiti began exploring pastel as a medium in 1987 in a bid to introduce it to the art community as a formidable medium. For the next four years, he used the medium constantly and made portraits of different people in the process. By 1991, he stopped making portraits in pastel and moved into abstract watercolors. He holds a Higher National Diploma and a Masters of Fine Arts Degree from Auchi Polytechnic and the University of Benin, respectively. Between 1985 to 1993, as a lecturer at the Federal Polytechnic, Auchi, Ovraiti trained and tutored a number of artists who have become household names in the contemporary Nigerian art world. He is known as the most expressive watercolourist in Nigeria and his exploration of chalk pastel in the 1980s popularised the medium and drove its acceptance in Nigeria. The exhibition which will end on Saturday, 24th December, 2022, is supported Loving Gaze, Pepsi, Tiger Beer, Indomie Noodles, Mikano, Haier Thermocool and others.