Lagos, Nigeria – April 7, 2022 – Alexis Galleries is pleased to present Highway Preachers, a solo exhibition by Ghanaian-Nigerian multidisciplinary artist Diseye Tantua, his first solo show in 5 years. Building on Tantua’s practice of exploring communication through inscriptions found on transit buses and documentation of this trend, Highway Preachers is a continuation of his 2009 exhibition Look & Laugh. His metaphorical themes express a cultural connection between Nigeria and Ghana, serving as both a memorialization of culture and a medium for communication.

Highway Preachers, curated by Ugonna Ibe, will be on view at Alexis Galleries, Victoria Island, Lagos, from April 10 -24, 2022.

Known for his Afrocentric interpretation of pop art; combining graphic symbols, bold colours and expressive text, his work explores themes of communication, spirituality and nostalgia. Tantua draws upon experiences from his childhood in both Ghana and Nigeria, observing the passages, proverbs and commandments written on commercial cars, trucks, and buses known as ‘tro-tro’ in Ghana and ‘bolekaja’ in Nigeria.

This practice is commonly thought to have originated with the early missionaries, who reportedly moved with their buses (on which were boldly inscribed the word “MISSIONARY”) from one community to another. Fascinated by these slogans which have evolved to include personalised and often humorous indigenous vernacular messages, Tantua recognized the power and impact they have in educating and communicating and began to record these trends on his canvas, documenting them for posterity and directing our attention to the messages.

Alongside his artistic practice, Tantua is committed to promoting the cultural landscape, he has in the last few years founded D-Artist SHRINE, a space dedicated to the arts in Port Harcourt, Rivers State, Nigeria. He serves presently as creative director. In addition, his on-going project ‘Artists & Studios, Nigeria and Ghana’ is conceived as a touring exhibition, video documentary and coffee table book. Recently featured as one of the top designers/ product designers in a documentary ‘MADE BY DESIGN’ (episode eleven) on Netflix international, he has also appeared on CNN Africa Avant-Garde and Reuters News, among others. 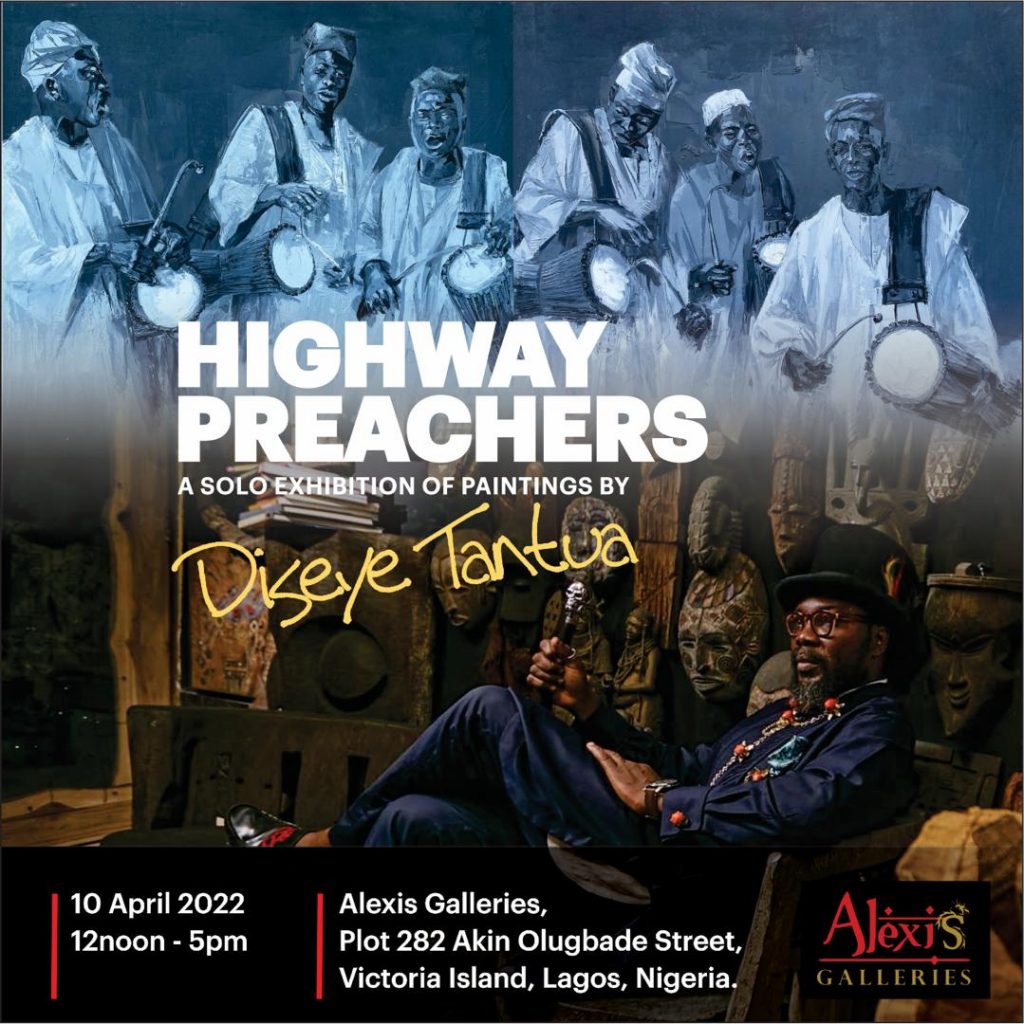 In Highway Preachers, the works of acrylic on canvas and oil on canvas, featuring hastily sketched lines and quick brush strokes, depict forms of transit and movement. In contrast to the vibrant and saturated colours found in the Look & Laugh (2009), Tantua introduces works in neutral tones, monochrome blues, black and grey. The themes of faith and optimism are still evident in this body of work as Tantua includes aeroplanes with titles such as I Have A Dream & No Time To Dream Small. In works like V.I.P, the imagery has been expanded to include other social groups in an attempt to deepen the message and further the discussion.

“The brilliance of Diseye Tantua’s works is its presentation of complex societal issues in a style that allows the audience to engage within their capacity,” says curator Ugonna Ibe. “Collectively, these 12 works speak to Tantua’s role as a storyteller and his pursuit of communicating deep messages and contributing to the strengthening of the social fabric.

As a painter, his strong personal style can be understood as an Afrocentric interpretation of pop art, complete with indigenous proverbs inscribed in vernacular. To date, he has won many awards and his works can be found in significant collections all over the world.

Alongside his creative practice, he is also a well- known male fashion model for several major brands, as well as an influencer. Self-styled as an “experimentalist”, his brand name ‘D-ARTIST’ is aimed at defining himself simply as an artist while resisting strict compartmentalising as a fashionista, interior/ product designer, painter, sculptor or graphic artist.

Diseye Tantua’s several professional affiliations include the Society of Nigerian Artists (SNA), where he held sway as vice president south east( 2018- 21). Prior to this position, he was chairman of the Rivers state chapter( 2015-18). He is also a member of the Guild of Professional Fine Artists of Nigeria (GFA). In both organisations, he continues to mentor many young artists and has worked to engender the highest standards of practice and teaching in the visual arts through exhibitions, workshops and seminars. For contributing immensely to the growth of the SNA, and to the visual arts in Nigeria, he was recently honoured with a Fellowship.

Committed to promoting the cultural landscape, Tantua has in the last few years founded D-Artist SHRINE, a space dedicated to the arts in Port Harcourt, Rivers State, Nigeria. He serves presently as creative director.

In addition, his on-going project ‘Artists & Studios, Nigeria and Ghana’ is conceived as a touring exhibition, video documentary and coffee table book. It is today recognised as the most complete undertaking chronicling the working lives of the region’s artists.

Recently featured as one of the top designers/ product designers in a documentary ‘MADE BY DESIGN’ (episode eleven) on Netflix international, he has also appeared on CNN Africa Avant-Garde and Reuters News, among others.